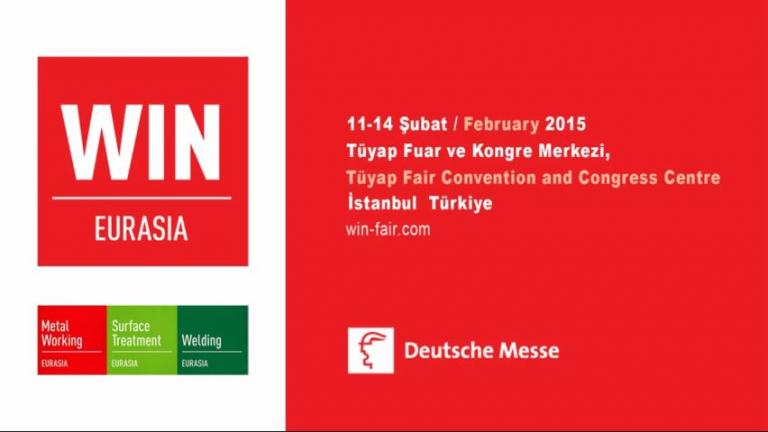 Celebrating its 20th anniversary, WIN Metalworking is being staged by Hannover Messe Bileşim Fuarcılık at the TÜYAP Fair Convention and Congress Center on February 12-15, 2015.

Supporting with The fair will open its doors for professional visitors for the 20th time and bring together 3 different trade fairs, namely Metalworking, Surface Treatment and Welding, under a single roof.

Moreover, it will focus on occupational health and safety through its special section called Safe@Work, which will be organized as part of the fair.

Organized for the first time this year as a result of cooperation between Hannover Fairs International GmbH and Hinte GmbH, the special section “Safe@Work” will be supported with speaker sessions as well.

It is aimed that this special fair and session will serve as a key instrument to offer a comprehensive technical occupational safety information in contact with industrial sectors.

Leading companies from Austria, Bulgaria, China, Denmark, France, Hungary, Italy, Germany, South Korea, The Netherlands, UK, U.A.E and Turkey will exhibit their innovations at WIN Metalworking. Among them; Germany, Italy and South Korea will be presented as a group of pavillion with their governments supports.

WIN Metalworking is considered as the most important gathering of the sectors for the entire Eurasian economic region, besides Turkey. Throughout the fair, a large percentage of visitors come from North Africa (Morocco, Tunisia, Algeria), Near and Central Asia (Azerbaijan, Georgia, Kazakhstan) and the Gulf states – nations with highly dynamic economic trends. Also, just like the last year, buyers from many countries will attend WIN Metalworking Fair this year as well in order to build business contacts as part of the “Hosted Buyer Program” with the support of Ministry of Economy.